TBM Grace began tunnelling from Forrestfield in mid-2017, installing more than 4500 rings over 8km to arrive at Bayswater Junction today.

The 600-tonne machine will now be dismantled and craned out of the dive structure in preparation for the arrival of TBM Sandy, who is expected to finish tunnelling in May.

“With the end of tunnelling in sight, work is continuing on important infrastructure components such as station construction and fit out and readying the tunnels for track laying,” she said.

“The precision engineering it has taken for this machine to tunnel 8km, through varying and sometimes challenging soil types, to break through in exactly the right spot is truly remarkable.”

Salini Impregilo – NRW Joint Venture Project Director Richard Graham said the completion of the first tunnel was an achievement to be celebrated.

Mr Graham said the project’s route has seen the TBMs tunnel within close proximity to major services and infrastructure, and through varying difficult geology including thick clay and sand.

“They have tunnelled under operating railway lines, beneath Perth Airport’s operating runways, then late last year reached their deepest point under the Swan River at 26m,” he said.

“These are significant challenges which were navigated successfully, for which we are very proud.”

The tunnelling team operates 24/7 and is made up of 120 people – 80 per cent of which are local workers being upskilled in the industry.

The $1.86 billion Forrestfield-Airport Link will deliver a new rail service to the eastern suburbs of Perth – with three new stations at Redcliffe, Airport Central and Forrestfield.

In addition to building the tunnels, major infrastructure works are continuing on the three new stations.

Forrestfield Station’s steel roof structure is now complete, and installation of the roof sheeting is underway. Construction of the Skybridge – which will connect Airport Central Station with Terminal 1 – is nearing completion, and construction at Redcliffe Station is ongoing.

The Forrestfield-Airport Link is due to open in late 2021, providing a 20-minute rail link between the eastern foothills, Perth Airport and Perth CBD. 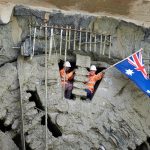